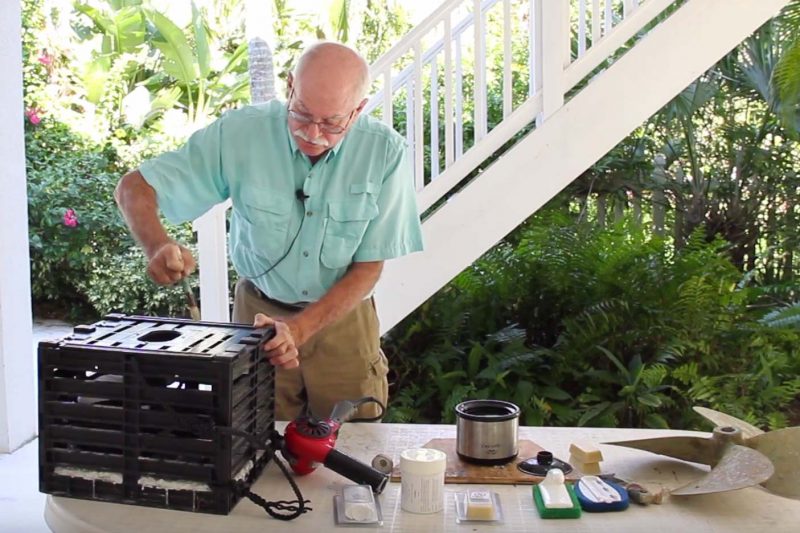 An inventor from Cortez, Florida, Dr. Steven Beckham, has created an environmentally friendly way to control barnacle, zebra and quagga mussel growth on underwater structures such as boat hulls, running gear and crab traps. Barnacle Stop® is an EPA registered product that controls barnacles, zebra mussels and quagga mussels, and is now available at www.barnaclestop.com.

Barnacles and mussels can pose major problems for both small boats and large ships. Barnacles accumulate on boat hulls, which can reduce fuel economy and increase CO2 emissions accordingly. Zebra and quagga mussels not only foul boat hulls they also plug water intakes and irrigation equipment.

“Barnacle Stop® works by preventing the attachment of the barnacles’ and mussels’ Byssal thread,” Beckham said. “This is a proteinaceous thread similar to a spider web that the invertebrates make for attachment. It is believed that the barnacles and mussels find the active ingredient in Barnacle Stop® irritating and avoid attaching to treated surfaces.”

Barnacle Stop® can be applied two way. Underwater it is applied as a crayon to cleaned surfaces like soaping a window. Out of the water it is melted in a slow cooker and painted on. A spray-on application is being developed. Since Barnacle Stop® doesn’t kill anything the surfaces must be clean.

The active ingredient, capsaicin, is a natural extract from chili peppers. Barnacle Stop® is composed of pharmaceutical grade capsaicin in a proprietary blend of natural waxes to produce a water insoluble product. The blend is patent pending.

A common way to prevent barnacles from vessels is to introduce a poisonous substance into the bottom paint mix. The poison is slowly released from the paint to deter invaders, but this can have negative effects on other marine life and ecosystems.

To help resolve this issue, Beckham came to Mote Marine Laboratory (www.mote.org) — an independent, nonprofit marine science institution — to serve as one of the laboratories testing the product.

Mote also performed the chemistry tests essential for EPA registration, including tests for efficacy and for the amount of active ingredient that is needed in the product.

Now that the product is in commercial production, Mote’s Ecotoxicology Program will continue to provide quality control for each batch of product produced. Barnacle-Blocker will donate three percent of the gross sales from the product to Mote.

Toxicity tests were performed by an EPA certified lab (Marinco Bioassay Laboratory) to show that Barnacle Stop® does not harm marine or freshwater fish or invertebrates.

Aside from Mote’s research, beginning in 2016 Barnacle Stop® has been tested in Michigan, Indiana and Minnesota lakes for controlling zebra mussels. There is also an ongoing test in Lake Mead under a National Park Service research permit for the control of quagga mussels. In Pine Lake, La Porte, Indiana, untreated test coupons averaged 80 percent infestation coverage. Plastic coupons treated with Barnacle Stop® had 0 percent infestation. In Lake Mead after six months in the water untreated coupons averaged 16 percent infestation coverage.

Barnacle-Blocker, LLC is a U.S. company that develops, tests, manufactures and markets an effective and environmentally friendly antifoulant. The idea was conceived in 2012 when Dr. Steven Beckham, founder of the company, tired of having to clean barnacles from the props and rudders of his 36’ Prairie trawler. Following lengthy experimentation with pharmaceutical grade capsaicin in varying strengths, dispersed in different proprietary inert application/carrying materials, Barnacle Stop® was finally developed.

Barnacle Stop® is essentially water insoluble. According to the inventor, this property makes it friendly to the environment and safe to apply when used according to label directions; it is about as dangerous as a jalapeno popper.

Barnacle Stop® was developed, tested and is manufactured in Cortez, Florida.